This post may contain Amazon or other affiliate links. As an Amazon Associate I earn from qualifying purchases at no additional cost to you.

This classic Pineapple Baked Ham is flavorful, juicy, and moist, and coated with sticky brown sugar honey glaze, and topped with pineapple rings and cherries that make it a fun and elegant centerpiece for your dinner table.

Oven baked ham with pineapples is a yummy and easy way to elevate a classic ham recipe for the Christmas or Thanksgiving holidays, or anytime you want to dress a ham up for dinner!

We’ve baked a lot of ham around here, and Pineapple Baked Ham is my favorite way to bake a large piece of ham.

We start with a cooked ham and dress it up so that it is both flavorful, delicious and yes, juicy. No dry ham business here!

These pineapple rings help maintain moisture in the ham, and along with the sweet and sticky brown sugar and honey glaze, elevate and the flavors in the baked ham.

The end product is a truly flavorful, moist and juicy pineapple baked ham.

You can eat the pineapple along with ham if you are like me and am obsessed with the ham and pineapple combo. If you don’t care for pineapples, toss them after cooking, but do not omit pineapples because they are an important part of this recipe!

If you have leftovers, make Ham and Cheese Croissant Casserole, Frittata, Ham and Bean Soup or Ham and Cheese Calzone to use up your leftover ham! Or be like me and intentionally put aside pineapple baked ham to make these yummies. 😉

I really appreciate how pineapple baked ham is such a versatile dish that can be transformed into so many other dishes.

Whenever I make a large piece of ham, not only do we eat it as a main course with a few sides, we make sandwiches with it, add it to homemade pizzas, make omelettes with it, and then transform leftovers baked ham with pineapple into other yummy ham dishes.

How to cook ham without drying it out

One of the most important thing to note when making this pineapple baked ham is we want to cook it in such a way that it doesn’t dry out, and is still juicy and moist.

Yes, flavor is important (and we will absolutely make sure this is crazy flavorful!), but if everything is right but ham is not juicy and moist, your pineapple baked ham just won’t taste as good.

I’m going to walk you through step-by-step how to cook baked ham with pineapple well, and avoid that dryness in your ham.

For this pineapple baked ham recipe, we are using a pre-cooked piece of ham, which is commonly what you will find in the grocery stores around the holidays. A very large cooked piece of ham, may I add. Because it is cooked, we are essentially heating up the ham when we put it in the oven.

Here are all my tips and tricks to heating up this pineapple baked ham well while keeping it juicy and moist:

It’s worth it, I promise.

And I assure you, it’s not half as intimidating as it sounds. I have complete faith in you. 💛

There are so many types of hams out there. If you are trying to figure out what to buy for this baked ham with pineapple recipe, here is what I typically recommend.

In order to maintain the optimal moistness in ham, I like to get pre-cook ham that is 1) not spiral cut (they dry out too quickly when baked), and 2) bone-in.

If you end up with a spiral cut ham or boneless ham, be careful and do not overcook them because they do dry out faster.

How to make Pineapple Baked Ham

Bring ham to a large roasting dish (remove roasting rack) with the non skin side faced down, them add about 1 cup of water to the bottom of the dish.

The water on the pan will help keep your pineapple baked ham moist.

Some recipes will call for scoring the ham, but I don’t like to do that because in my experience that also dries out the ham.

Cover roasting dish with aluminum foil. Use two pieces like I did if needed, and make sure to seal it fairly tightly.

The idea is to “steam” the ham when it is baked the oven so that it doesn’t dry out.

While ham is baking, prepare the brown sugar and honey glaze on the stovetop, which is made with:

Think of this brown sugar honey glaze as the flavor enhancer for your baked ham with pineapples. It brings an additional dimension of sweet and savory flavors to your already yummy ham.

After ham is baked in the oven for 1 hour, remove it from oven.

And starting right here is when the instructions get a bit less ‘one size fits all’.

There are a lot of variable in terms of how long to bake the ham, whether to cover or not, how often to check it, etc.

It depends on the size of the ham, how well your oven heats up (not all oven heat to the right temperature evenly), whether ham is bone in or not, how big is the bone in the ham, the shape of the ham, how cold was the ham when you brought it into the oven…I could go on and on.

Lots of variables! To give a one size fits all instruction for any baked ham (or large baked piece of meat) is somewhat impossible. And the results will be all over the place.

So here is what I will do. I’ll give you as much instructions as I can, but ask that you take certain things into consideration, and be open to tweaking accordingly.

Once you get ham out of the oven, use a meat thermometer and check on the temperature of the ham. Then you do one of two things:

Scenario 1 – Ham is still far from being done

If the thickest part of your pineapple baked honey glazed ham is below 125℉, brush brown sugar honey glaze, secure pineapple and cherries with toothpicks, and cover ham with aluminum foil and bake it at 375℉.

Every 20 minutes, remove pineapple baked ham from oven, unwrap the aluminum foil, check on the temperature of the ham, brush more glaze on it, wrap it again with aluminum foil, and bring it back to the oven to bake.

Repeat this until the thickest part of the ham reaches 140℉. And then pineapple baked ham is ready to serve.

You may need to do the 20-minute interval twice, or three times, or even four or five times. But it is important to keep checking and not wait too long to check on your baked ham with pineapples to avoid overcooking it.

Scenario 2 – Ham is close to being done

If the thickest part of the pineapple glazed honey baked ham is above 125℉ when you pull it out from the oven for the first time, brush on the rest of the glaze, add pineapples and cherries, cover and bake at 375℉ and check it in 15 minute intervals until ham reaches 140℉.

For both scenarios, if the temperature of baked ham with pineapples is getting very close to the 140℉ mark but isn’t quite there yet, you may want to check on the ham more frequently to avoid overcooking it.

Also, feel free to bake pineapple baked ham uncovered during the last 10 minutes if needed. Baking uncovered does speed up the process, but it will also dry out the ham a lot faster so avoid doing so for longer than 15 minutes. And you should only bake it uncovered at the very end.

As a point of reference, the last time I made this, I had a 9 pound ham bone-in ham and I cooked the ham for the first hour under 325℉, then did two rounds of the 20-minute intervals.

Note: this pineapple baked ham recipe is best used for ham that is above 7 pounds and not suitable for small hams!

After baked ham with pineapples is done, let it sit for 5-10 minutes before cutting into it.

The pineapple rings and cherries makes the ham look vibrant and gorgeous so you don’t really need to do much with it.

Sometimes I like to throw in a few extra pineapple rings and some fresh herbs like parsley to brighten up the platter if you really want to deck it out even more!

As for sides that goes well with baked ham with pineapples, here are some of my favorites!

Just what I need today and everyday: juicy, perfectly baked ham with pineapples with a sticky crust, infused with brown sugar and honey flavors.

A little sweet, a little savory…a whole lot of yum.

Be still my heart. 🥰

How do you prevent ham from drying out?

Be sure to follow my detailed instructions but here are a few tips to maintain juiciness in your ham:
1) Cooking it low and slow, make sure to cover with aluminum foil as needed
2) Add water to the bottom of the pan (where the ham sits)
3) Check in frequently especially in the last hour or so of cooking.
4) Don’t rush it! Do not cook in on high temperature. Patience is key!
5) Bone-in ham and non-spiral ham are better at retaining its juiciness than boneless ham and spiral ham.

Can you freeze leftover ham?

Yes! Make sure to store in an airtight container or zip lock bag. It can be store in the freezer for up to 4 months.

How long can I refrigerate ham?

Refrigerate in airtight container and consume within 5-6 days. If you need to store it for longer, freeze leftovers.

DID YOU ENJOY THIS RECIPE? Please comment below and give us a 5-star rating! This will help others find this recipe on Google and Pinterest! We very much your help! 🤍 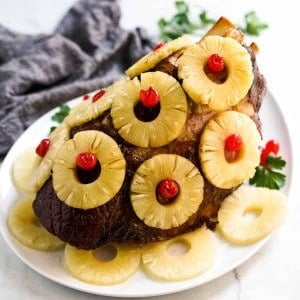 Note 1: Use toothpicks to secure the cherries and let the pineapple rings hang on to the cherries.  Note 2: When checking temperature of the ham, make sure to check multiple points. The thickest part of the ham, or the parts near the bones will take the longest to heat up. All parts of the ham should be 140℉ before ham is done.  Note 3: Optional: if the temperature of the ham is getting very close to the 150℉ mark but isn’t quite there yet, you may want to check on the ham more frequently (less than 20 or 15  minute interval) to avoid overcooking it. You can also bake ham uncovered during the last 10-15 minutes if needed to speed up the process. Baking the ham uncovered will dry out the ham so avoid doing that for more than 15 minutes. Always remember: you can still fix it if it’s undercook (just cook it longer), but you cannot fix it if you overcook it (kinda stuck with dry ham! 😉 ) Note 4: Many variables could increase or decrease the cook time needed. For e.g. spiral ham and non bone-in ham will take less time to cook and dry out faster, a smaller ham will take less time to cook, ham that is not completely defrost will take longer to cook. There is no one size fit all instructions for a recipe like this! Adjust accordingly. 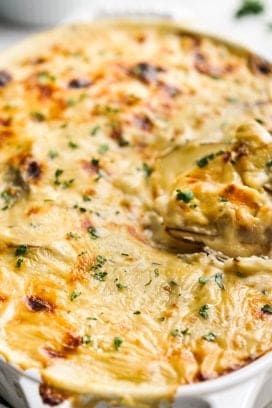 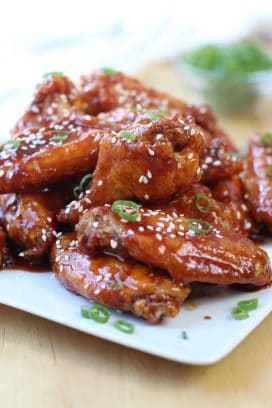