Jump to Recipe
This post may contain Amazon or other affiliate links. As an Amazon Associate I earn from qualifying purchases at no additional cost to you.

The creamy banana flavored pudding combined with fresh whipped cream, Nilla wafers and chunks of bananas in every bite is all the summer decadence I need in my life.

Why mason jars? Well, these Banana Pudding Jars are the perfect single serving treat when you desperately need some sugar in your life but don’t want a whole dish of it sitting in the fridge tempting you and making you regret making it in the first place.

Yumminess and guiltless (well, semi guiltless…) is what we are striving for today…

Each Banana Pudding Jar is layered with all the banana pudding essentials and made without instant pudding mix. Instead we are using fresh ingredients to make the pudding from scratch – which is totally doable (no worries I’m guiding you through every step of the way) and most importantly, way more delicious.

These Individual Banana Pudding are also perfect for entertaining, showers, and picnics. It looks all cutesy, artsy and Pinterest-inspired…with very little efforts!

This is my tried and true banana pudding recipe. One I make over and over again. And cannot wait to overeat it all summer long!

What I love most about this recipe is that mashed bananas are incorporated into the pudding itself, instead of just having pieces of banana layered between vanilla flavored pudding. So it’s basically vanilla-banana flavored pudding, and let me tell you, once you go there, you will never want to go back!

How to make pudding

The part I’m going to spend the most time on is how to make the actual pudding itself, because once you get that down, it’s just all about layering a cute jar.

And you bet I’ll provide everything you need to get this pudding-making skill under your belt!

First, start by whisking eggs into a fairly large bowl and setting it aside.

Then bring these ingredients to a boil under medium heat in a pot:

Be sure to use a whisk to whisk continuously throughout this whole process, and lower heat once it comes to a boil. Whisking continuously is so important to prevent pudding from hardening and burning at the bottom of the pot because there’s sugar in the mixture, and also to smooth out the lumps and completely dissolve the flour.

So in other words, when you make the pudding, you want to be by the stove whisking non-stop!

The good news is, it doesn’t take very long for the pudding to thicken. Once it thickens, remove from heat.

Finally, we bring the mixture back into the pot, heat it under medium heat until it comes to a boil (And yes – still keep stirring/whisking), then remove from heat, add sweetened condensed milk and one mashed ripe banana into the mixture and give it a good stir.

Transfer mixture into a separate container so that it cools for 30 minutes. Because the pot is probably still hot, leaving the pudding in the pot will slow down the cooling process.

After that, refrigerate pudding for at least 3-4 hours. I typically make the pudding ahead and leave it in the refrigerator overnight because I like my pudding super cold.

Basically, here are two very important things to note while making the pudding:

If you are making whipped cream from scratch, this is a good time to make it. If that feels like a lot, no problemo! Get a box of cool whip and use that instead!

Homemade whipped cream is basically whisking together heavy whipping cream and sugar until it thickens. Whisk it on high speed using a hand held mixer or stand mixer (p/s: using a stand mixer makes this SUCH a breeze) for a few minutes. As much as store-bought cool whip does it job in these Mason Jar Banana Pudding, homemade whipped cream takes any banana pudding to the next level.

And then comes the real fun part…layering!

I use ~10oz jars for these, but you can use any size jars, cups, or even bowls! Make as much or as little as you want! It is super versatile.

Note: When using 10oz jars, I get about four servings (sometimes three if I go overboard) of these Banana Pudding Jars.

Here’s how I layer them:

For these 10oz jars, I have two layers of each of the above, but you can always add more layers or just do one layer.

Once everything is layered, top with a slice of banana and a piece of Nilla wafer.

I like to let it sir for ~30 minutes in the fridge so that Nilla wafers soften. And then dig in, savor, and enjoy every bite! A.k.a. the BEST part. 💛

DID YOU ENJOY THIS RECIPE? Please comment below and give us a 5-star rating! This will help others find this recipe on Google and Pinterest! We very much appreciate your help! 🤍 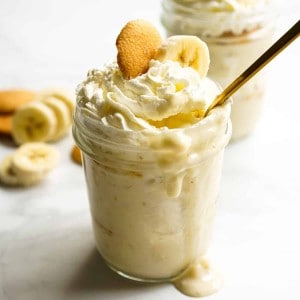 Want to make more than 4 servings? Spread everything out to 6-8 small jars and make smaller servings! 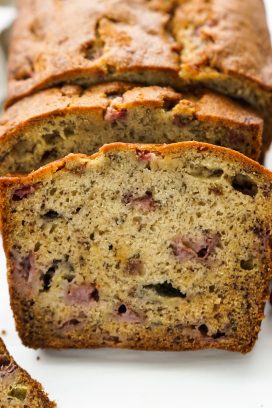 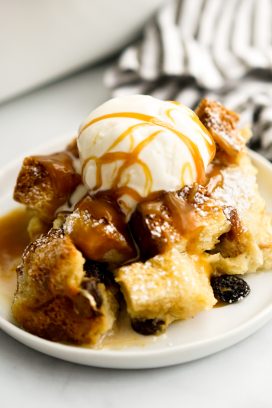 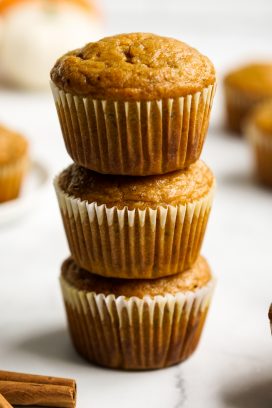 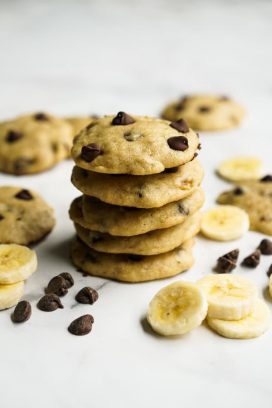 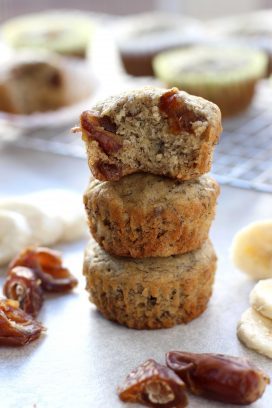 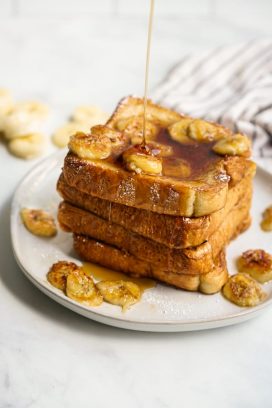 This is comfort food that makes me so happy. It’s one of those desserts that brings back childhood memories isn’t it

Definitely 🙂 Thanks so much…it’s pretty amazing!!